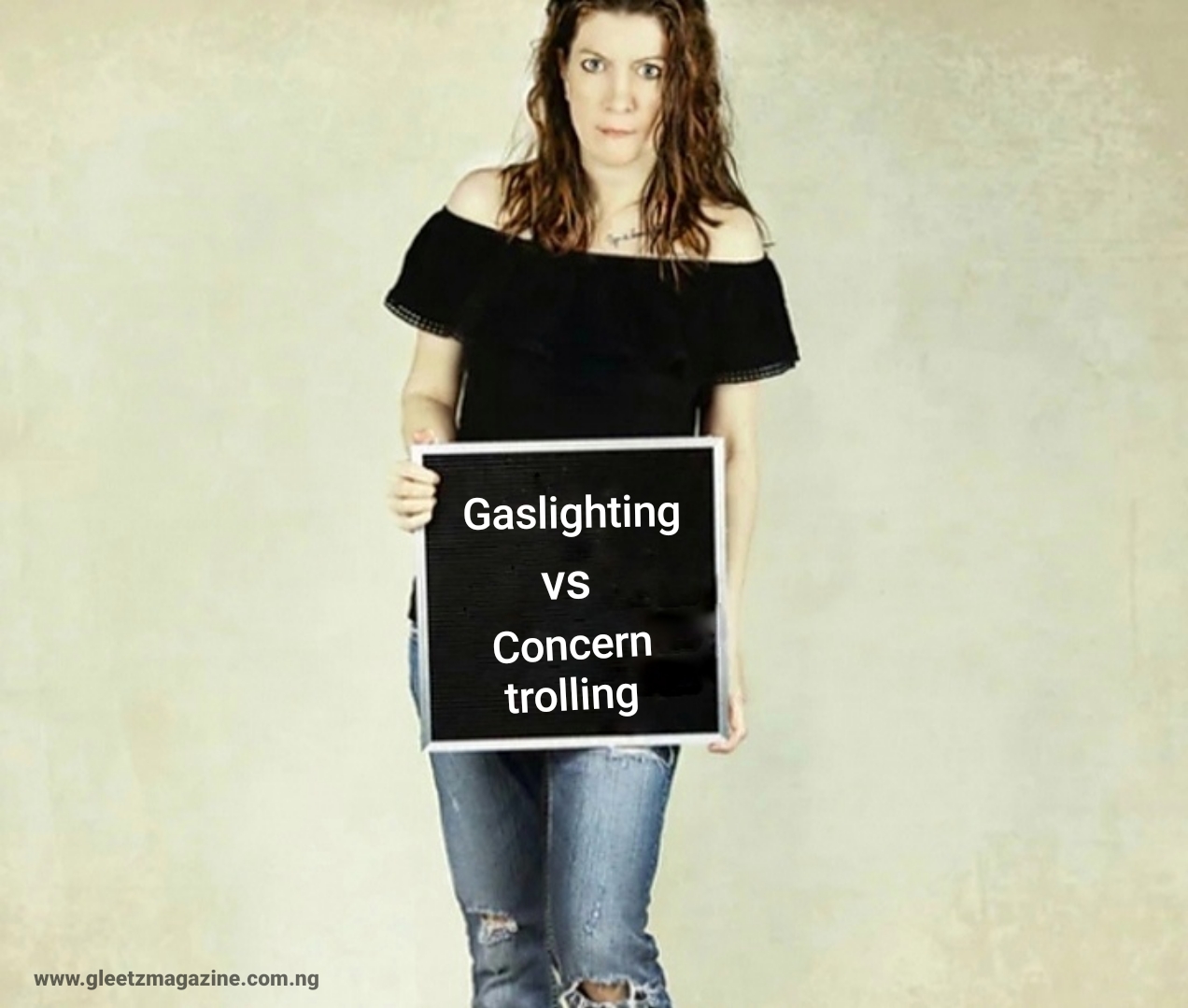 I am of the opinion that a gaslighter is a concern troll who was left unchecked, here’s why;
“While I support body positivity and loving yourself, obesity is a real issue that claims lives and I worry about your health.

I know and believe that women should be allowed to wear and post anything they want online, but I’m just worried someone might do something bad with your photos.

I know that reservations are all about equal representation, but I’m just worried a doctor who hasn’t worked hard enough might be unsafe to go to.
If you can envision yourself saying any of the above, you are a concern troll.

These statements, are examples of concern trolling
There are two ways of disagreeing with someone. One is to disagree openly the other is to do it in a patronizing manner which is maipulative and insultive. Mostimes, the latter is done by disrupting regular conversation by offering unwanted/irrelevant advice to fix another person is problems or dictate their life choices.

Concern trolls usually try to soften the blow by speaking like they are your friends and sometimes get offended when you don’t view things from where they stand, they are armed with trucks of baseless information usually have a god complex. They are terrible people who use passive aggresive means of communication.
In the hierachy of humanity, concern trolls are right above lucifer and gaslighters at the top.

The phrase to gaslight refers to the act of undermining another person’s reality by denying facts, the environment around them, or their feelings. Targets of gaslighting are manipulated into turning against their cognition, their emotions, and who they fundamentally are as people.

The phrase originated from a 1938 mystery thriller written by British playwright Patrick Hamilton called Gas Light, made into a popular movie in 1944 starring Ingrid Bergman and Charles Boyer. In the film, husband Gregory manipulates his adoring, trusting wife Paula into believing she can no longer trust her own perceptions of reality.

In one pivotal scene, Gregory causes the gaslights in the house to flicker by turning them on in the attic of the house. Yet when Paula asks why the gaslights are flickering, he insists that it’s not really happening and that it’s all in her mind, causing her to doubt her self-perception. Hence the term gaslighting was born.
Gaslighters say;

Oh come on. I never said that.
You’re just being overly sensitive.
I don’t know why you’re making such a big deal out of this.

Psychologists use the term gaslighting to refer to a specific type of manipulation where the manipulator is trying to get someone else (or a group of people) to question their own reality, memory or perceptions. And it’s always a serious problem, according to psychologists.

Gaslighting is the trampoline concern trolls fall on to when your call thier bluff.
ONE of the best ways to rid yourselves f these type of people is to have compassion for yourself. Decide that you are going to love yourself endlessly and that your opinions of who you are is all that matters.