Hello there, and welcome to today’s episode of touristy. Here, you get a near full gist of what Nigeria looks like touristically. That is, we ensure to promote, optimize and bring close to you some of the most beautiful tourist attractions within Nigeria.

On this episode, I will be bringing to your mobile screen a comprehensive gist about the Osun Osogbo festival and subsequently the Nike arts gallery, workshop, as well as Susan Wenger’s house, all in the ancient city of Osogbo.

Osogbo is the capital city of Osun state in Nigeria. It’s one of the few states on the south western part of the country, with loads of customs and traditions that seamlessly tickles one’s fancy.

However, on the drive by, a conscious stop was made at the Osun Osogbo grove which is unarguably the finest tourist site in the city. The Sacred Grove is a large cultural landscape of undisturbed forest in the city of Osogbo, and It is understood to be just the second heritage forest in Nigeria. Plus it is equally among the last of the sacred forests which usually adjoined the edges of most Yoruba cities before extensive urbanization.
Perhaps it’s one of the reasons UNESCO adopted it as one of it’s world heritage sites. 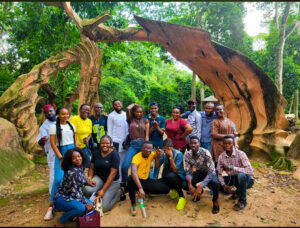 However, at the time of visiting, after being warmly embraced by healthy looking monkeys, we saw a host of worshippers and custodians of the goddess doing their daily rounds and paying obeisance to the mother goddess with songs and chants of all sorts. 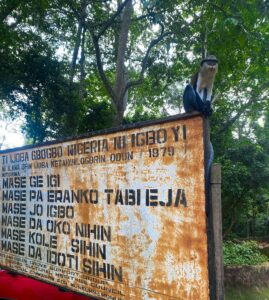 As expected, the site is filled with lots of ancient looking structures with various functions that they serve. At the entrance is a beautiful structure which among other purposes serves as a passage for the Arugba (pot carrier) during the Osun festival. The virgin lady passes through this spot down to the river with the pot on her head. And while at it, she keeps mum without saying a word to anyone till she reaches the river. 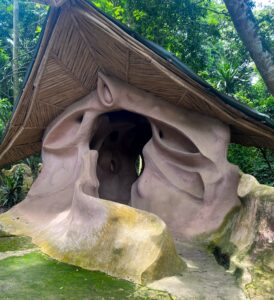 During the festival which takes place every August, Osun state as a whole feels the presence of new legs from all walks of life. Tourists, fun lovers, cultural believers and academics alike all grace the site for various reasons. Hence it’s safe to say that the annual festival has morphed into a treasured and relished event.

Having negotiated these few details, one spot that intrigues is the bridge linking the grove to a farm settlement. The suspension bridge in question was built by the Europeans sometimes around 1935 to enable the villagers cross from their settlement to the other side considering the fact that the can’t swim. 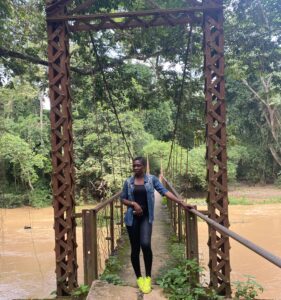 With all said and perused, below are a few things to note before taking a trip down to the Osun Osogbo grove;

Where is it located?

The Osun Osogbo sacred grove is located somewhere on the ourskirt of the city of Osogbo. On the map, it appears to be on the same road as the fountain university. This could well serve as a roadmap for first timers to the grove, plus Osun residents are very welcoming and are always more than willing to direct visitors to the grove at all times.

There isn’t much to discuss here. You would be meeting with the Osun custodians and others of like mind, So It’s best to just wear anything modest and comfortable. 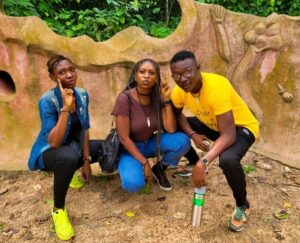 How far is it?

Osun State isn’t a small space to say the least, However once you find yourself within Osogbo, you are just within touching distance to the grove. All there is to do is ask for descriptions and you would be rightly directed to the sacred grove.

How much is the pay?

From the entrance, you would be required to pay a sum of #500 naira if you would like to go in with your mobile phone. Although I and my folks paid #200, and perhaps that’s because we were large in numbers.

Once you gain entry, you might have to part with a few more money. Close to the osun river itself is where the worshippers sit to chant and do appraisals to the goddess, and they expect that you’d give them some shekels too. We gave them the sum of #500 but they refused until it was raised to #1000.

Asides it’s beauty, the story and tale behind the sacred grove is worthy of admiration. Myths have it that at a time a certain hunter found a grove during a hunting expedition told a friend of his whose community was suffering from drought. Subsequent to that, they all came to settle in the forest. Having being settled, he and his people dialogued with the deities met at the site and they startes engaging in farming.

However, while clearing the bush for farming, tragedy struck! One of the trees being felled fell on the dye pots of Osun, causing an uproar within the forest. The Osun goddess was displeased.

According to bookies, the voices of other spirits came out from the forest commiserating with Osun saying, “Oso-igbo” meaning “spirit of the bush, we empathise with you” (this was how the name Osogbo − by which the town is now known – came about).

In a bid to make amends, Oba Larooye sealed a pact with Osun: If Osun would solve the townspeople’s physical and spiritual problems, they would respect the deities’ houses. Osun also promised to expand their community if they would build a shrine for her and worship her; thus, the earliest settlement, which includes the palaces and a market, was established in the grove.

Summarily, these happenings and subsequent events led to the annual worshipping of the Osun ggoddess. The festival takes place for two weeks within the month of August.

It’s Buhari, for me

4 newly released songs you should copy