Azumini River: An exotic site for your sight

It’s another day, and a good one to go on a walk of tourism. As always, you know your armchair tourism is complete with me in the picture, I gatchu like that.

Today, we take a trip to Azumini town in Abia State, Nigeria. Azumini is a town located some miles south to the commercial city of Aba, precisely in Ukwa East LGA area of the State. A town famed for it’s popular blue river known as the Azumini waters. i

The river is unarguably one of the most exotic river in Africa. A beautiful crystal blue river which is surrounded by greeness from the trees and flowers guarded by it. It is equally understood that there are fishes and other water creatures that dwells in the river, albeit I wasn’t privileged to see any of these, however the beauty that the river heralds and the presence of gorgeous looking butterflies that apparently get loads of comfort from the flowers banking the river, as well as the colourful birds that perch makes the sight a heavenly one. 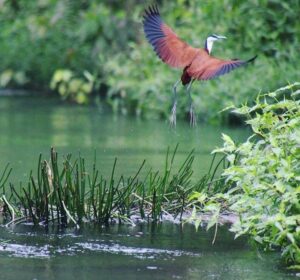 The sapphire waters can be said to have all the ingredients of a touristic site, and as much as the state government haven’t been able to maximize it’s full potentials, this still had nothing on travelers and tourists from visiting this beautiful site to have a glimpse of the stunning views, crystal clear water, abundant sandy beaches and the luxury of cruising in a canoe _ all presented by this impressive azumini river.

However, according to reports I was able to gather from the locals, though blue in colour, the river is said to always turn green whenever it rains which leaves some sort of mystery to it.

While some said it’s a blessing from the gods, others purported that it’s simply due to the healing powers of the river. However, I find it difficult buying any of those submissions, as I tend to have misgivings about them. As much as I understand that the locals’ gists must be respected because of how much they know about their locality, I want to also believe that the singular fact that this beautiful blue river is surrounded by different trees makes it a no brainer. These trees produce pollens, especially in hot weather. 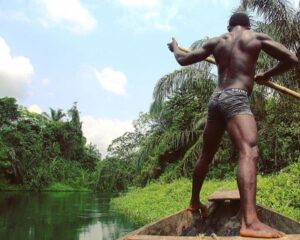 Apparently when the rain falls on the trees, it washes the pollens into the river and it naturally turns green. No godly affiliation or healing ability whatsoever as painted by the locals. It’s just organic!

On the other hand, as a tourist, I’ve learnt overtime to give in to the ideals of the host community. It is usually the best thing to do in such circumstances.  But take away nothing from the comeliness and awesomeness of the azumini river, It’s just heavenly. 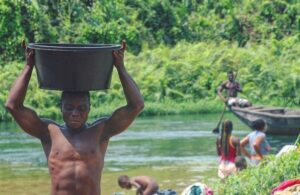 Conclusively, I entreat the Abia state government to tap into this site and leverage on it as it could be a huge source of revenue generation for the State, just like a mazel tov charm. And for travel enthusiasts like me, you should include this site in your itinerary when next you’re set to pack your bags for another trip. You might also wish to visit the National War Museum in Umuahia, the Ojukwu’s bunker, Abia Tower and some other mindblowing sites within the State. It’s touristy!

Adulting is a sham