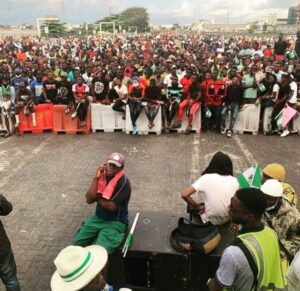 It’s indubitably been a hot couple of days across the country. What started as a peaceful protest to end police brutality and the total overhaul of the Special anti robbery squad (SARS) in Nigeria escalated into a mayhem. Several lifes have been lost already, properties destroyed and looting here and there.

However, the crux of the problems is seemingly believed to be what is now widely tagged the #Lekkimassacre that happened at the lekki toll gate last Tuesday where several persons were killed in cold blood. It’s almost a week already, but It’s one gory tale that won’t go away in a long while.

Although, just the same way one can’t quite lay hold on anyone in particular concerning the looting of shops and destruction of properties that followed, It’s equally a mind bug pointing fingers at the exact brain behind the removal of the cameras at the toll gate and the taking down of the advert board which is major source source of illumination at the gate prior to the genocide. Everyone appears to be slippering away like an eel, with lies, and excuses to free themselves from being scapegoated. 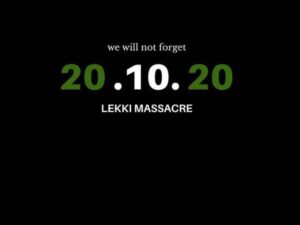 As much as I’d avoid name callings, Nigerians are not fools. Hence, to a large extent we understand how the plot was carefully mapped out and executed. Whatever was brewing in their heads while planning the killing doesn’t even matter at the moment, They’ve only succeeded in throwing the entire nation into sixes and sevens.

A whole lot of revelation have been unraveled, some persons are beginning to take laws into their own hands as a result of this and many States have since declared a curfew in a bid to manage the situation. 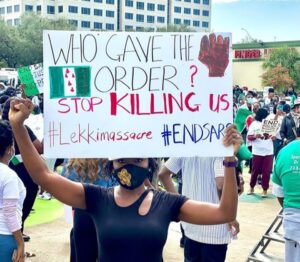 But truth be told, this pandemonium doesn’t look like going away anytime soon. It’s bad enough that the FG have been patronizing Nigerians with horrible and mind splitting lies for a long time, but the last straw that broke their camel’s back was the shooting at the Lekki toll gate that fateful Tuesday night. To add insult to the injury, the head of the upstairs operations in the country have refused to address the situation. And it’s quite pathetic that after all said and done, he could only come up with a scripted rendition that doesn’t even add up. I listened to every bit of the ‘recitation’, and I must say that I’m far from impressed. It was a sham, and practically rudderless to say the least.

Words fail me right now, so I won’t dwell largely on this as much as I should. I’m livid!

However, I would like to entreat everyone to kindly put themselves in safe quarters during this period of unrest, and ensure to stay out of harms way. It doesn’t look like their are havens anymore right now, because even while indoors, some persons still met their deaths. But it’s still in our best interests that we stay off the streets as much as we can and avoid all sorts of altercations.

It’s not a happy moment right now, we want our voices amplified, we need the government to listen to every bit of what we yearn for, thereby ensuring that those who died for this cause don’t just die for nothing sake. But, we still need to be very circumspect with our dealings and how we go about ventilating our wants. Remember, “He who knows to retreat lives to fight another day”.

Now there’s a story of a mysterious camera spotted at the scene, and I say it’s unreal . However, it would be interesting to see what they are all about this time around.

But, no matter what happens at the end of all these, I’m confident that the big wigs now know that Nigerian youths and the masses in general are no fools. And we can always hunt them down no matter how lofty their hideouts are, plus it’s only a question of time before we take our country back.