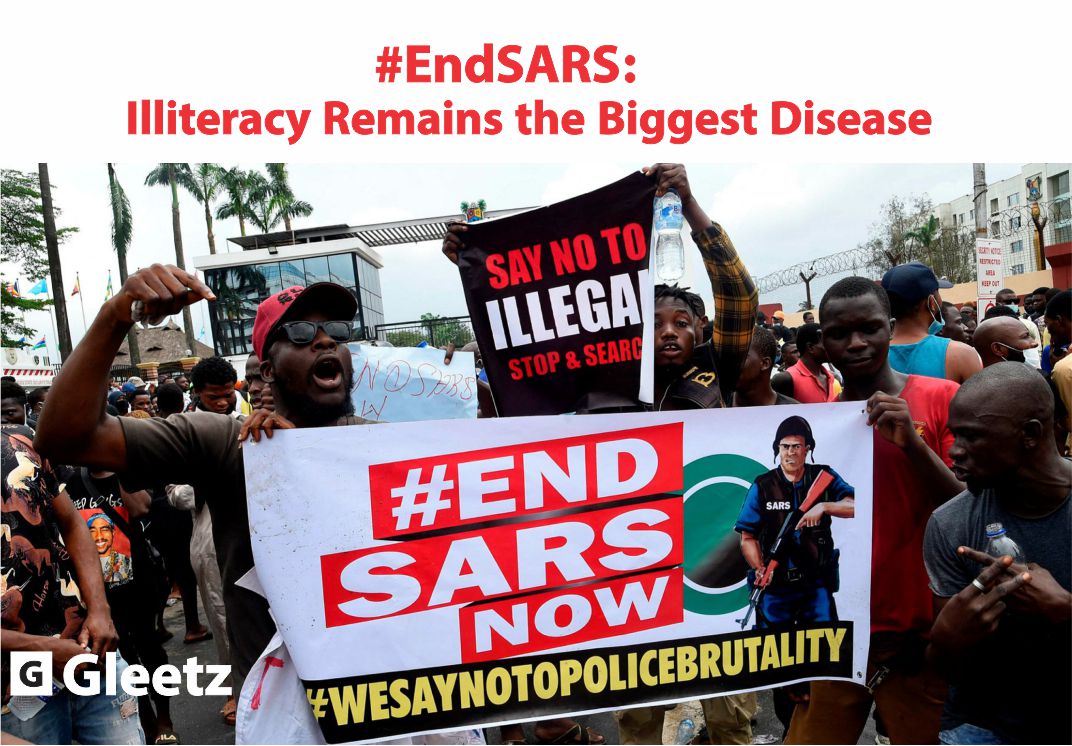 To me, poverty used to uphold this font; ‘the biggest diseases known to mankind’ but the turn with which the #ENDSARS protest have taken. It has been reiterated in my subconscious that of all the economic infections to fall upon man, Illiteracy remains the worst and may just be the most expensive to rid.

If you are a Nigerian like myself, you would have gotten accustomed to the quite derogatory (because the scales have fallen from our eyes)- term that the politicians use when addressing the younger generation. Which are, but not limited to, phrases such as; ‘our kids’, ‘our children’.

Research shows that they often use these expression to appeal to our hearts, placing themselves in the esteem we place our parents and as such expect same regard, perseverance and respect.
Now, the #ENDSARS protest, have taken on a seemingly violent phase, where government officials employ touts, hoodlums or riffraff. Whichever you may, to cause havoc on the ground of the peaceful protest in order to blame the destruction on the peaceful protestors and shed as much blood as possible so as to scare the protestors back into their homes.

It is sad because these young people they send to do no good are the biggest benefactors of the poor governance. We make a plight everyday to the government to reform the educational sector and they have done the barest minimum to make it work. Why?

This is because they benefit from the illiteracy that breeds like disease in stagnant water. I have said it before in a previous article on here titled “who police the Nigerian police?” and will repeat the sentence here today…

“Anything you have refused to address that comes off as a problem to others, you either benefit from it directly or indirectly.”

This is exactly the case with illiteracy and Nigerian government today. One would expect that with the way these politicians are quick to address the youth of Nigeria as their ‘kids’, they would treat them the way they treat their children. Of course, if they did that beggars would ride wishes but that is not possible.

When interacting with these miscreants they would often have praises to sing for these politicians and this is because they have won them over with a chicken change that will barely last them the week. You would often hear phrases like “Omo Iya mi” which means “child of my mother” literally but means figuratively “my sibling” somehow it never does click in their minds the odd factor that their brother/sister has allowed them rot in poverty, sickness and poor living condition. The illiteracy always seemed to win.

The sad thing about this disease called illiteracy is that it befalls anyone thus why we have a term such as ‘Educated illiterate’
It is disheartening because you expect someone who had seen the four walls of an educational facility to have some basic knowledge as to how the world works but they always seem to be the most, daft, ignorant and stubborn.

While we fight police brutality and for a new Nigeria, we must ensure that this dehumanizing disease does not breach the walls of solidity we aim to build.